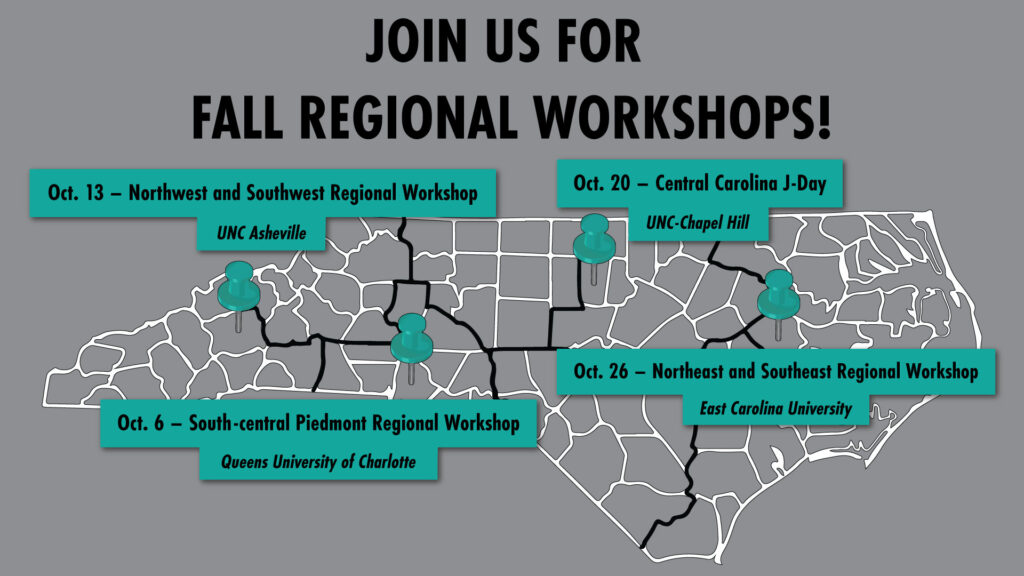 NCSMA’s fall regional workshops will be co-hosted by universities and newspapers around North Carolina, offering opportunities for students and advisers to hone their journalism skills for the year’s publications. Sessions include topics relating to news writing, podcasting, fiction writing, yearbook trends, broadcast, photography/videography, editors’ roundtables, advisers’ roundtables and many more!

Student media staffs were recognized at the North Carolina Scholastic Media Association’s annual Institute, held at UNC-Chapel Hill’s Hussman School of Journalism and Media, June 13-15. During the Institute, high school journalism students and teachers from across the state participated in instructional sessions led by university faculty and featured writers, designers and journalists.

The top award, the Tar Heel, was presented to the following student media:

One judge wrote, “Caroline impressed me with the depth and breadth of her reporting, and her leadership during a tough time for student journalists. Most of all, she shows great promise in her willingness to take on controversial and crucial issues not just in her school but in her local community.”

Another wrote, “I was particularly impressed that she had two stories get followed up on by local media outlets. It was also impossible to ignore the impact of her opinion piece on CHALT and the local elections.”

The foundation will also award the winners’ journalism programs. The Journalist of the Year’s program will receive $500. The three alternates’ programs will each receive $250.

The Rivers-Coffey state scholarships and awards will be presented during the N.C. Scholastic Media Institute, a summer journalism workshop open to students and teachers across the state.